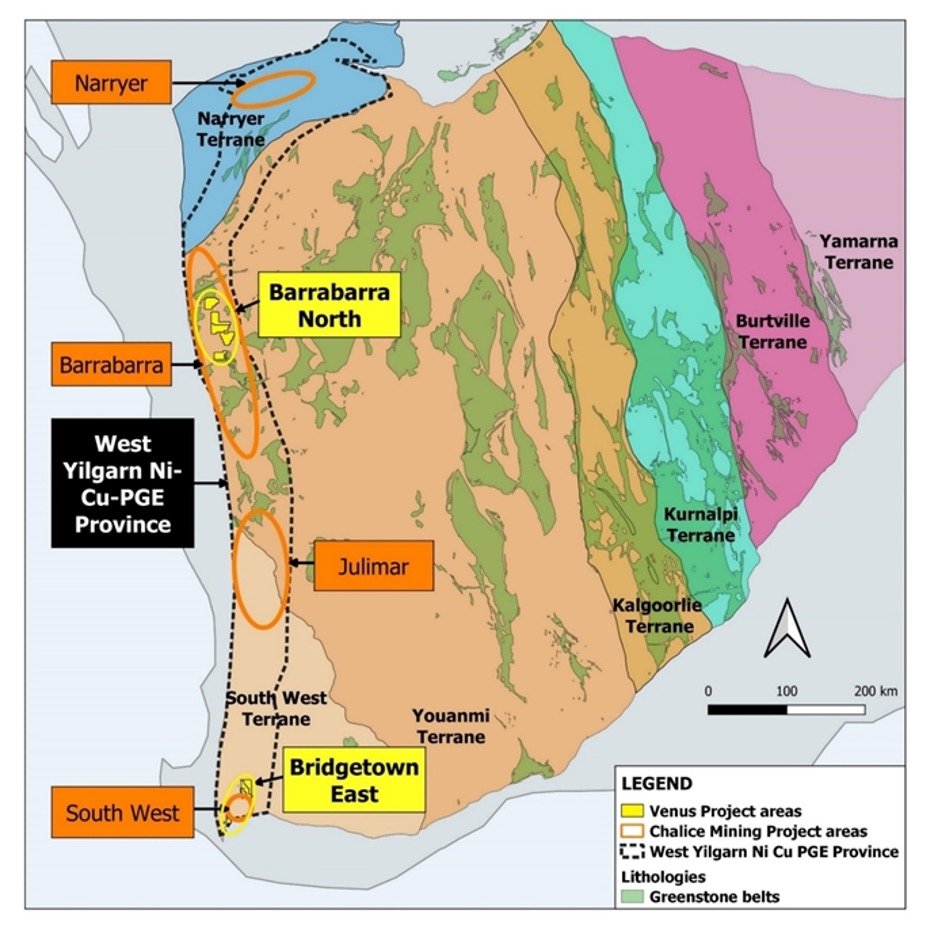 Venus’ Barrabarra North Cu-Ni-PGE project is located in the northwest of the Yilgarn Craton and comprises five exploration licence applications (ELA59/2548, ELA70/5786, ELA70/5787, ELA70/5912 and ELA70/5913) for a total of 986km2; it abuts Chalice Mining Limited’s (Chalice) Barrabarra Project (refer CHN ASX 21 July 2020). The project area falls within the West Yilgarn Ni-Cu-PGE Province first outlined by Chalice (refer CHN ASX release 4 May 2021) that covers an area of c. 1,200km X 100km and extends from the Narryer Terrane in the north to the South West Terrane in the south.

Venus identified prospective target areas at its Barrabarra North Project near Chalice’ tenure based on the Laterite geochemical database for the western Yilgarn Craton (YLA) published by the Geological Survey of Western Australia (GeoView website).  In the southern part of ELA 59/2548, concentrations of 4,410 ppm chromium (Cr), and 10.5 ppb and 12.5 ppb of palladium (Pd) and platinum (Pt) respectively are reported in YLA laterite sample #101216; in the central part of Venus’ Barrabarra North Project, YLA laterite sample #101358 has 300 ppm Cr, 82 ppm copper (Cu), 13 ppb Pt and 16.4 ppb Pd. These concentrations are anomalous in laterite and may indicate the presence of mafic and/or ultramafic bedrock within the dominantly granitic terrain.  Mafic-ultramafic intrusive rocks may, potentially, be sulphide-bearing and hosting Cu-Ni-PGE mineralisation of the Julimar type discovered by Chalice. 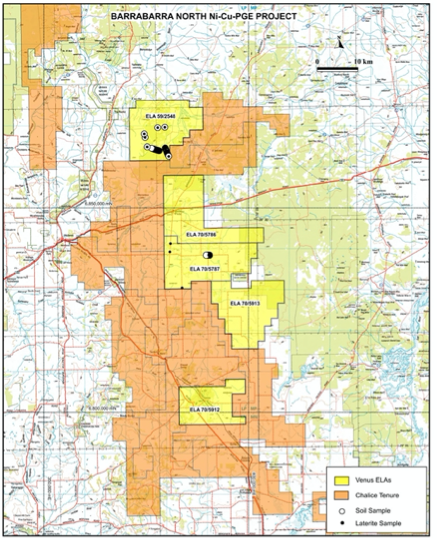 Illustrating the prospectivity of the area is a JV between Chalice Gold Mines (ASX CHN) and Venture Minerals (Chalice may earn up to a 70% interest by spending $3.7 million on exploration over 4 years) that will explore Venture’s Southwest Project for Julimar-style mineralisation and will cover the Thor prospect which intersected 2.4m of massive sulphide averaging 0.5% Cu with 0.05% Ni, 0.04% Co and anomalous Au & Pd (VMS and CHN ASX releases 21 July 2020)

A moving loop electromagnetic (MLEM) survey commenced at the first of four Venus target areas (Target 1 to 4) with anomalous PGE - base metal geochemistry and associated with previously defined airborne Heli-electromagnetic (HEM) anomalies (refer ASX release 27 September 2018).  The results show a mid to late time response, centred on 430,250mE along the northernmost line of the survey, that remains open to the north (refer ASX release 24 September 2021). This mid to late time response is located along the edge of the previously defined HEM anomaly and adjacent to a magnetic anomaly.

Due to the recent high rainfall within the project area and local geological conditions, the EM survey displays IP effects that are affecting the data. This has made it difficult to complete the modelling of the reported anomalies and requires further investigation to fully resolve. This will be best achieved when ground conditions have suitably improved and by adopting an alternative Fixed Loop or Moving Loop survey design. 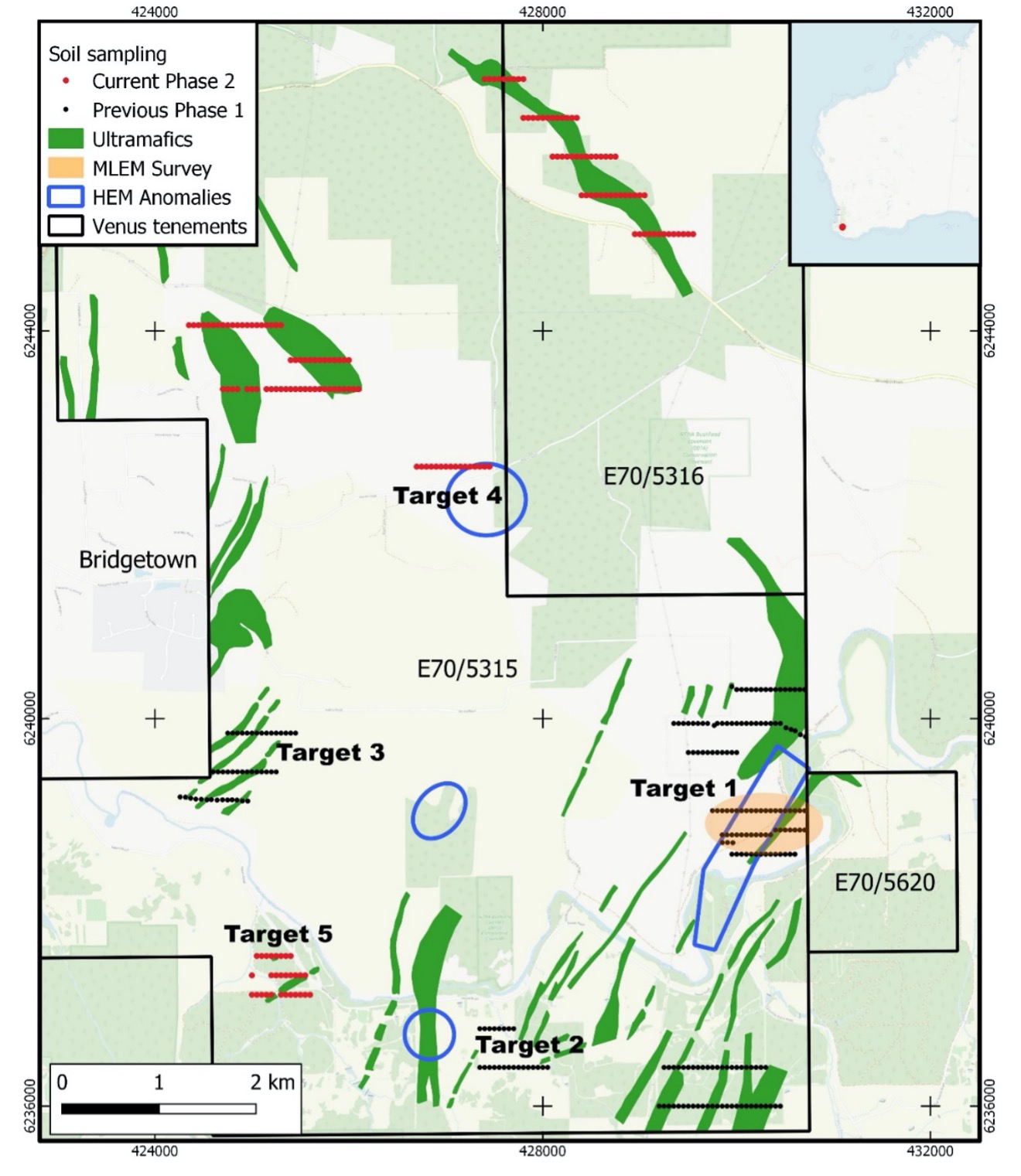 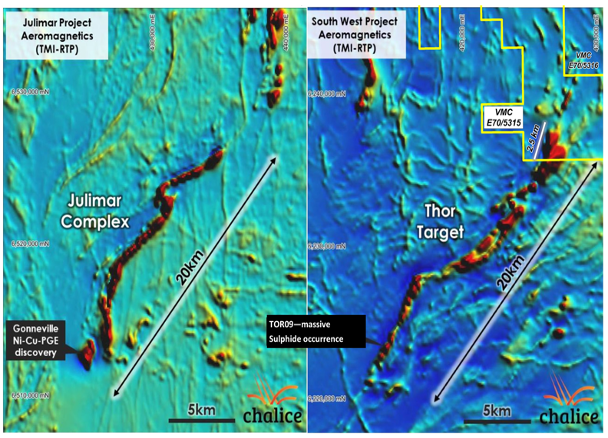