A major breakthrough in regard to the Youanmi Vanadium Project following receipt of proof-of-concept metallurgical test work on oxide ores.

• The test work confirms strong recovery into solution of V2O5 by simple atmospheric sulphuric acid leach testing of oxide vanadium ores, together with co-extraction of nickel, copper and cobalt

• These factors give Venus a potential low cost entry into significant and rapid vanadium production.

• A recent geological review of the Youanmi Vanadium Oxide Project identified a widespread and remarkably even distribution of high vanadium values throughout the oxide inferred resource material from surface down to 50m depth.

• The inferred mineral resource occurs as a continuous zone 3.5 km long by up to 350m wide, ideal for bulk open pit mining (Plan 2 and Plan 3).

• Importantly, the soft oxide ores start at surface and have a zero open pit strip ratio all the way to the base of oxidation.

• The metallurgical test work by METS Engineering Group was initiated to see if the widespread vanadium values (together with low levels of copper, nickel and cobalt) in the abundant soft, friable oxide ore could be successfully leached by an acid leach atmospheric process.

• The test work was conducted on a random drill sample of the abundant, deeply weathered vanadium oxide gabbroic material that overlies the fresh rock Youanmi vanadium resource. Assays showed a head grade of 0.41% V2O5 for this sample.

• The test work confirms vanadium recovery into solution of between 66.9% and 69.58% V2O5 by simple atmospheric sulphuric acid leach testing of oxide vanadium ores, together with co-extraction of nickel, copper and cobalt.

• This success in proof-of-concept testing has major implications for the Youanmi Vanadium Oxide Project and its potential economics.

Venus is now planning a rapid advancement of the Project. This includes:

4. scoping study work by METS following the metallurgical testing; and 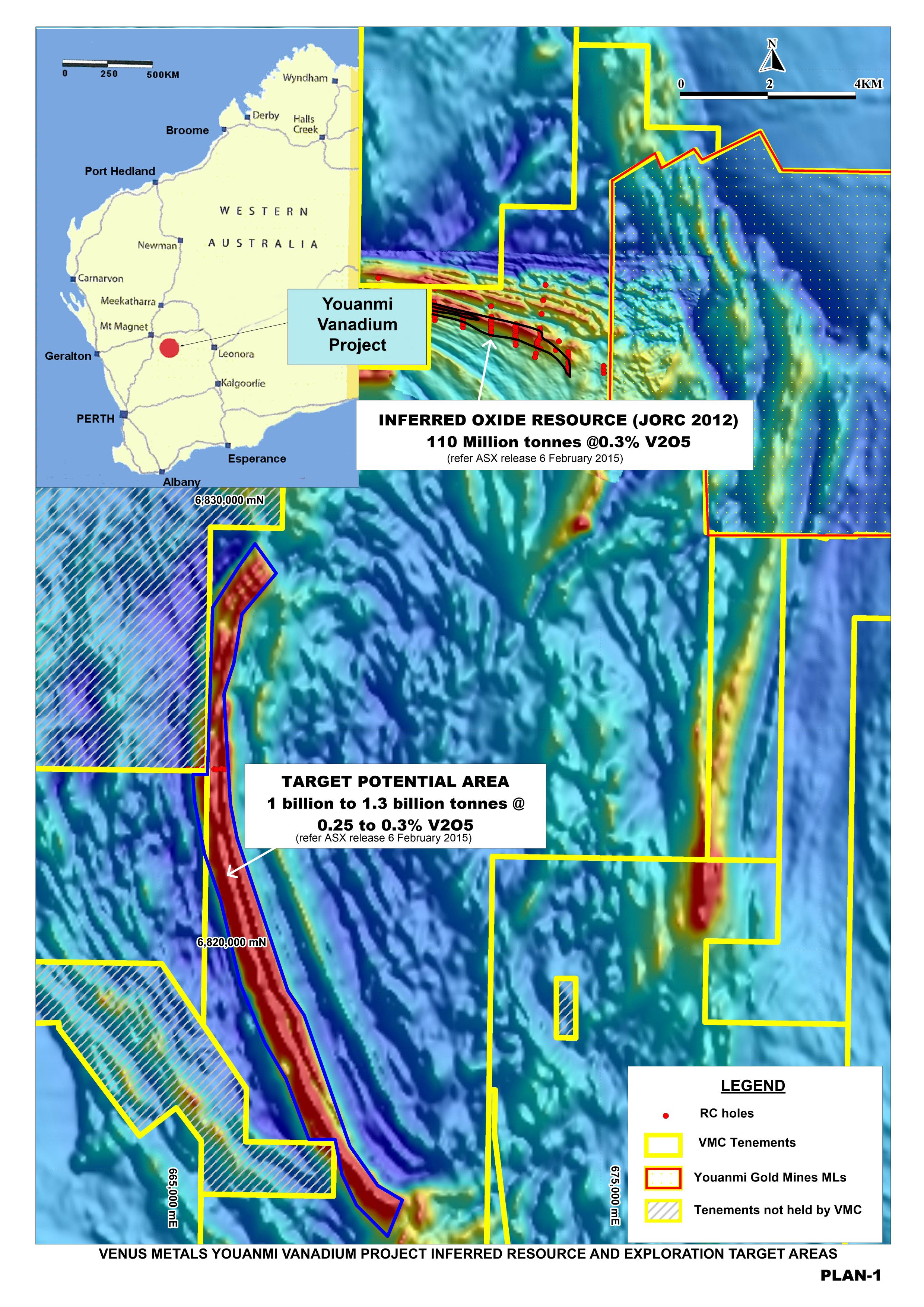 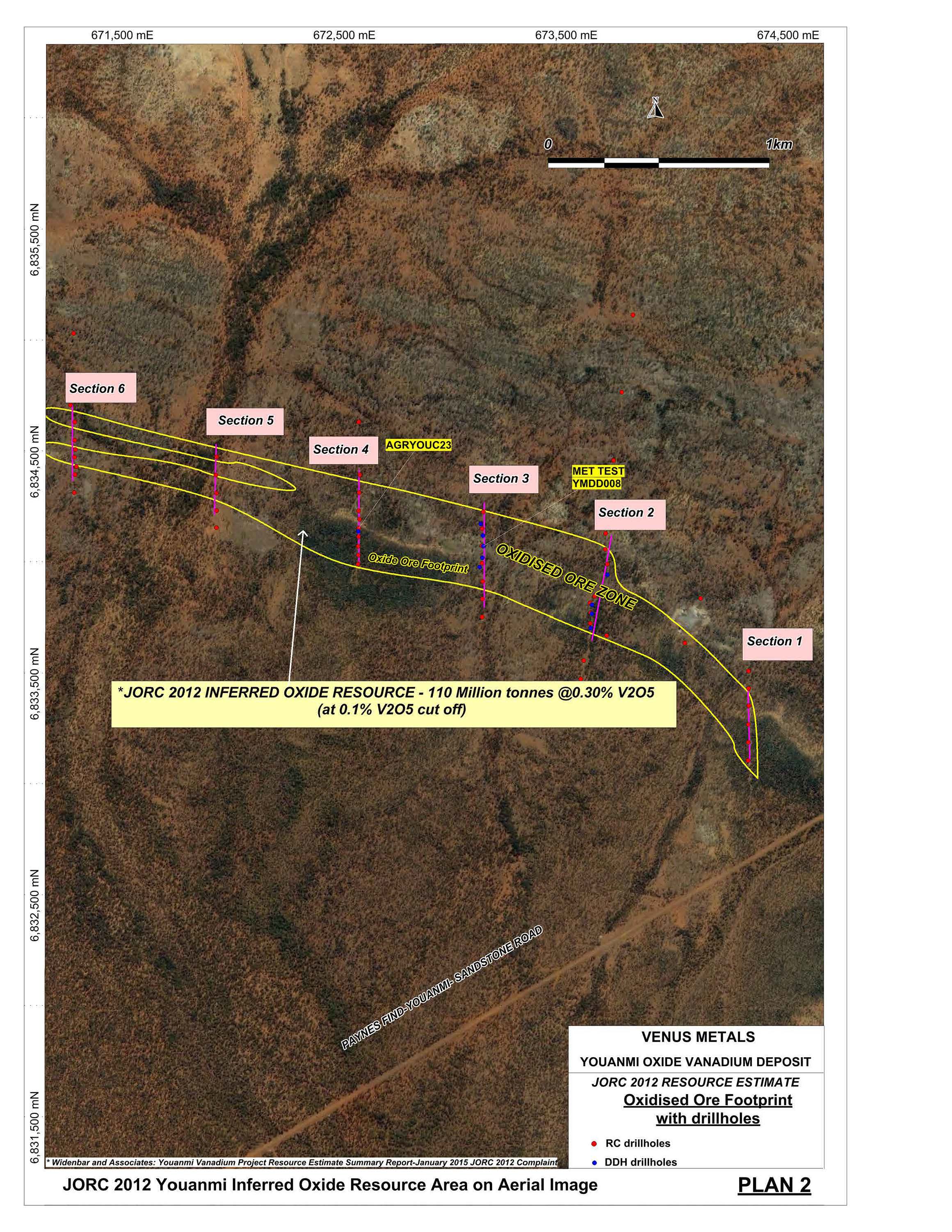 The Youanmi Vanadium Oxide Project is contained within E57/986. It is 90% owned by Venus and 10% by a prospector.  The prospector interest is free carried to a decision to mine, after which the interest becomes contributing or reverts to a 1.25% NSR.

In addition to the inferred resources, Widenbar identified an exploration target* at a 0.1% V2O5 cut off of 1 billion to 1.3 billion tonnes at 0.25 to 0.3% V2O5. This exploration target did not provide a separate oxide and fresh rock target category (refer ASX release 6 February 2015).

The Youanmi drill database was re-examined to look for features that might represent a point of difference from other vanadium projects in Australia (refer ASX relase 5 September 2018).

A number of factors stood out immediately:

1.The Youanmi vanadium ores are deeply oxidized.  A deeply weathered oxide ‘blanket’ some 30 to 50 meters deep occurs over the whole resource outline.

2.Significantly, there is an extensive and widespread distribution of high vanadium values throughout the oxide profile.

3.Distinct magnetite lenses, while forming some important bands, are mostly narrow and would not form separate minable lenses in the deposit.

4.These more magnetite rich zones however do carry higher vanadium values providing an opportunity to target high-grade zones during the early production years.

5.The vanadium values start from surface meaning that the oxide material has a zero strip ratio, a remarkable situation creating conditions for ultra-low cost mining.

6.The host rock is a coarse grained gabbro that has no carbonate minerals in the weathered zone (or in fresh rock). This means that acid solutions have a chance to do their work leaching vanadium and other minerals without being ‘stolen’ by carbonates forming CO2 before doing its leaching work.

7.The extensive distribution of vanadium values means that the Project can be treated as a bulk mining operation with minimal grade control (particularly now that proof-of-concept shows the Youanmi ores can be successfully leached).

METS Engineering (METS) was engaged by Venus Metals to conduct proof of concept leach test work of vanadium on an oxide sample from the Youanmi Vanadium Oxide Project. The key objective of the scope of work was to assess whether vanadium can be extracted into solution from an oxide sample from Youanmi, as well as assess the potential co-extraction of other valuable metals.

The test sample was crushed and homogenized by hand to obtain the subsamples for testing. No attempts were made at any beneficiation and the full raw sample was tested.

Sulphuric acid was chosen for all the acid leach tests.  METS have advised the reason is that this acid is the cheapest and most readily available, and is simpler for subsequent solvent extraction of any metals.

Three acid leach test were conducted on the sample having a head grade of 0.41% V2O5 (assayed via x-ray fluorescence).

The results from the three leach tests conducted show vanadium and other cobalt, copper and nickel can be extracted using sulphuric acid, the extraction levels increasing with temperature.

The following conclusions have been made following receipt of the Mets Engineering proof-of –concept test work.

1. Vanadium was able to be leached using sulphuric acid.

2. Very encouraging extraction percentages of up to 69.58% V2O5 have been obtained from an un-beneficiated raw sample.

3. The vanadium extraction increases with increasing temperature, but all at atmospheric pressure.

4. Cobalt, copper and nickel were co-extracted.

6. Venus will perform additional test work with the aim of characterizing the ore, beneficiating the ore prior to leaching and optimizing the leach (reduce acid consumption, assess leach temperatures etc).

he information in this report that relates to the Processing and Metallurgy Youanmi Vanadium Project is based on and fairly represents, information and supporting documentation compiled by Damian Connelly who is a Fellow, CP (Met) of The Australasian Institute of Mining and Metallurgy and a full time employee of METS. Damian Connelly has sufficient experience relevant to the style of mineralisation and type of deposit under consideration and to the activity which he is undertaking to qualify as a Competent Person as defined in the 2012 Edition of the ‘Australasian Code for Reporting of Exploration Results, Mineral Resources and Ore Reserves’. Damian Connelly consents to the inclusion in the report of the matters based on his information in the form and context in which it appears.

The information in this release that relates to the Youanmi Vanadium Project is based on information compiled by Mr Barry Fehlberg, a Competent Person who is a Member of the Australasian Institute of Mining and Metallurgy. Mr Fehlberg is Exploration Director of Venus Metals Corporation Limited. Mr Fehlberg has sufficient experience that is relevant to the style of mineralisation and type of deposit under consideration and to the activity that is being undertaken to qualify as a Competent Person as defined in the 2012 Edition of the ‘Australasian Code for Reporting of Exploration Results, Minerals Resources and Ore Reserves’. Mr Fehlberg consents to the inclusion in the release of the matters based on his information in the form and context that the information appears.

The information in this report that relates to Mineral Resources has been compiled by Mr Lynn Widenbar. Mr Widenbar, who is a Member of the Australasian Institute of Mining and Metallurgy, is a full time employee of Widenbar and Associates and produced the Mineral Resource Estimate and exploration target potential based on data and geological information supplied by Venus. Mr Widenbar has sufficient experience that is relevant to the style of mineralisation and type of deposit under consideration and to the activity that he is undertaking to qualify as a Competent Person as defined in the 2012 edition of the Australasian Code for Reporting of Exploration Results, Minerals Resources and Ore Reserves. Mr Widenbar consents to the inclusion in this report of the matters based on his information in the form and context that the information appears.